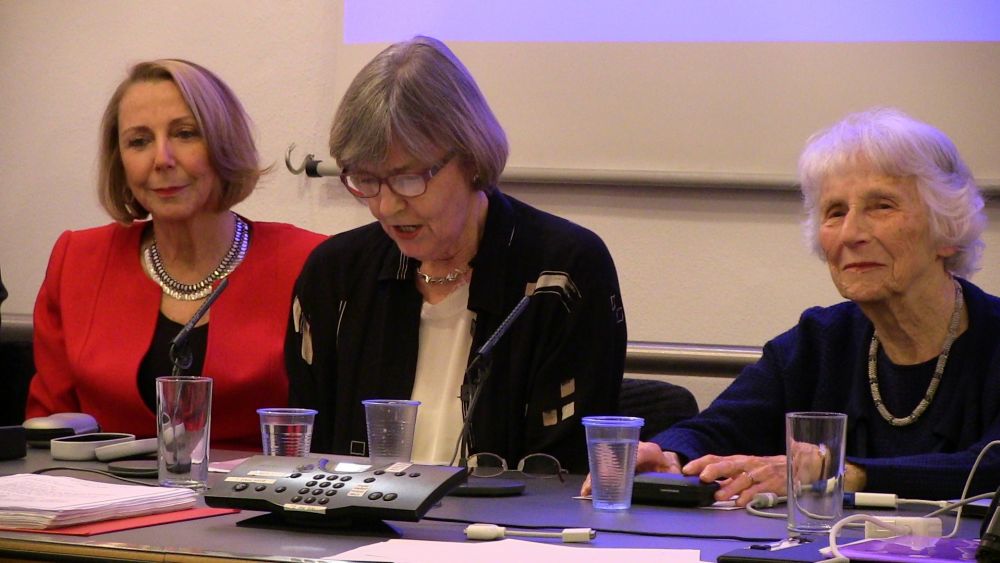 having the opportunity to speak to you, dear Anne-Marie, in honour of your birthday and to you all here, reminds me of the first case conference held by the German Psychoanalytical Society (DPG) in your former rooms, still in New Cavendish Street in 1998, the one and only time Joe could participate. This annual conference has remained a major event for us with many of you here having worked and still working with us. It is being organized by Gisela Klinckwort, formerly established by Bernd Gutmann and myself.

And I remember the times my wife Leila and I took part in meetings and conferences of the Anna-Freud Centre where Anne-Marie had been director in the early nineties.

And I recall the many times Anne-Marie stayed with us overnight when she came to Stuttgart for supervision and I have in mind the times we spent together either in her house in Circus Road, in her flat in Park View or on holidays– when over the years we had become friends.

Anne-Marie’s dedication to psychoanalysis in Germany, notably in the DPG, started in 1991 when a three-day clinical workshop was held for the first time with her, with many to follow until today. This conference was held in a basement of a hotel with 90 members participating.

- Dear Anne-Marie, I remember you coming down the stairs accompanied by Lore Schacht who then was the president of the DPV, at a time when hostile feelings still prevailed between the two German societies. You spontaneously and openly discussed with us details of a session of your own from the same morning, extraordinary for us, - and in group discussions you sensed our despair being isolated from the international analytic community, our self-doubt and an eagerness to learn.

We were unhappy with the split of the DPG, which had been re-established in 1945. This split occurred after the first IPA-Conference after the war in 1949. Only the then newly established DPV was accepted as a Society of the IPA in 1951, and the DPG was rejected.I think, this split was to some extent a consequence of members not being able to acknowledge and to feel responsible for what harm had been inflicted upon colleagues of the former DPG after 1933 and for the atrocities of Nazi-Germany. The damage done to psychoanalysis and our shortcomings have not been accepted before the 80ties. The acceptance opened the way for change.

Being together with Anne-Marie one could experience praxis and theory of analysis in evolution. This opened the way the way for an actual and lively transfer of psychoanalytic thinking. We came to experience psychoanalysis not as a corpus of knowledge to be learned from books, like we had to do before, but as a way of listening, as a way of thinking, as an attitude. An attitude which takes nothing for granted, tolerates not knowing and is open for unconscious communication, e.g., typical for Anne-Marie, open for latent manifestations of the Super-Ego or of sadomasochistic enactments. And we were confronted with the fact that we were used to work inside a system of third party payment and we had to learn to acknowledge its consequences and the importance of the frame.

As you may imagine a lot of later discussions evolved after work in restaurants and sometimes in her kitchen, in a tradition she and her late husband had always cherished. The microwave being not far away.

After 25 years we can see with a certain astonishment the broad and deep analytic development of a large analytic society against the spirit of the time of ever increasing psychotherapeutic demands invading psychoanalytic practise and training especially, but not only, in Germany.

Anne-Marie grew to be the centre of this transformation and as I know she herself has been transformed in this process. In fact, originally she had come to Germany quite reluctantly and with fear and suspicion, and she had needed encouragement from Serge Lebovici and from Joe.

At the beginning of this century Anne-Marie had been the Chair of a Joint Steering Committee of the IPA and supported and guided the DPG to become a Provisional Society of the IPA in 2001 and a Component Society in 2009. This development changed not only my society but also the DPV and our cooperation, a move away from splitting and projections in the German analytic community and a move towards fruitful joint encounters in the IPA or the EPF and e.g. the British-German Colloquium. During all those years Anne-Marie had also been engaged with the DPV; she has been on the board of the Sigmund-Freud-Institute and supported child analysis in the Training Institute now called Anna-Freud-Institute, both in Frankfurt. And she had helped the Joseph Sandler Research-conference to find an additional place in Frankfurt too.

- Dear Anne-Marie, after having addressed the fruitful and rich encounter we could enjoy together I want to acknowledge with emphasis that your engagement with German psychoanalysis has been an ambivalent and very personal endeavour, a process of working through, of shame, loss, pain and doubt.

Anne-Marie’s origin shows the wide range she has to cover. She grew up in Geneva in a francophone environment, with a German nanny. The roots of both her parents are Jewish-German, the families coming from Berlin and Hamburg. Her relation to German culture and language had been cut off abruptly in 1933, when she was 8 years old. During the war her family had taken care of Jewish children who have been send over the border from France to Switzerland by their desperate parents to save their lives.

Anne-Marie is not avoiding different ways of psychoanalytic thinking. The German Society has by all our love for her not become a Sandlerian Society. On the contrary she loves to open doors for others. She has always encouraged us to engage ourselves with other teachers and other traditions and developments of psychoanalysis. Being herself a central person in the world of psychoanalysis she would think idealisations of psychoanalysis (or of herself) as being defensive.

Anne-Marie takes up the material in supervisions in a welcoming and benevolent way, considerate of ever present but hidden demands of the Super-Ego and a narcissistic ideal. As we gradually began to realise, this reflects her attitude when working with her patients. The way she acknowledges the solutions found so far as the best possible, addressing the current conflict in the transference and the fear and wishes behind it, opens one’s mind for the suppressed.

Anne-Marie is always mindful of the narcissistic vulnerability involved, when she worked with her own patients, when she listened to cases presented and when she took up group discussions and in institutional quarrels in our initially deeply insecure Society. This makes her most convincing. Therein lies a deeply humane attitude tolerating what each of us has to defend against.

- Thank you for all you have given us, your understanding, your generosity and your friendship.